Monday, July 30, 2007
my english aural topic =) 10:37 PM
i chose this topic because i thought it be interesting and i was pretty curious to find out myself about the truths and myths of health. enjoy =)

Do carrots really help your eyesight? Should you actually eat for two if you're pregnant? It's no wonder many of us struggle to see through the mass of confusing advice, old wives' tales and health myths out there. That's why we're here to do it for you! Here, we investigate 10 of the most popular health myths and uncover the truth...

Myth one: Eating carrots improves your eyesight.
Truth: Though carrots contain a high concentration of vitamin A, essential for healthy eyesight (vitamin A defficiency can cause blindness), an extra helping on your plate won't give you X-ray vision. In fact the origin of the various sight-improving attributes of the humble carrot is generally credited to a campaign of misinformation carried out by the British Government during the World War II. British intelligence didn't want the Germans to know that they were using radar to detect bombing raids so they spread the rumour that they were feeding their pilots carrots in order to improve their vision. Trouble is the campaign was so successful people still believe it even today! Of course all things are relative - if you start off with a vitamin A deficiency, eating more carrots will of course improve your vision.

Myth two: Eating bread crusts makes your hair go curly.
Truth: Is having curly hair a good thing? Rumour-mongering parents certainly think so - generations have attempted to persuade their children eating crusts will encourage a healthy-looking mop. In fact there's no medical evidence to suggest eating bread crusts makes your hair go curly, though there may be other health benefits that aren't so well known. The browning of the crust may produce more healthy antioxidants, which in turn help prevent the body absorbing harmful oxidising agents in the atmosphere such as ozone.

Myth three: Using sun lotion protects you from skin cancer.
Truth: The problem with using suntan lotions is that it can lull you into a false sense of security. The fact is whether you are wearing sun lotion or not, you should still ration the amount of time you spend relaxing by the pool. Remember - suntan lotions are not total blocks: They still allow some UV through. And though you are protected from burning, the genetic changes in your skin that occur after exposure to the sun will still be there. Don't forget to cover up and wear a hat. You should also wear sunscreen in the UK between April and October, not just when you are somewhere hot on holiday.

Myth four: You can get cancer from barbecued food.
Truth: There's a persistent feeling these days that anything enjoyable must be bad for our health. So many things seem to be banned that we don't know where to turn, so when someone tells us that the burnt crust of barbecued food contains carcinogens, who are we to argue? But while it's true that the heterocyclic aromatic amines (HAAs) contained in the blackened edges of barbecue food are carcinogenic, there has been no evidence produced which links barbecued food to cancer. Perhaps this is because you would never eat enough charred food to cause the DNA damage that is central to cancer development. Also, you can reduce the carcinogens by 99 per cent by marinating the food before you grill it. It is thought this might be because typical marinade ingredients - tomatoes, olive oil, garlic and citrus juice - are high in cancer-fighting compounds. Interestingly, grilled vegetables have no cancer risk.

Myth five: A lump in your breast means you have breast cancer.
Truth: About 80 per cent of breast lumps are benign (non-cancerous). Sometimes there can be cysts, nipple discharges and calcification (calcium salt deposits in breast tissues) resulting from injury or bruising, hormonal changes or infection. However, should you find a lump you must contact a health professional straight away - catching cancer early significantly increases the chances of recovery.

Myth six: Low fat diets are a healthy way of losing weight.
Truth: Adoption of low-fat diets is widespread among those keen to lose weight and look great but unilaterally cutting out all fat from your diet can actually damage your health. Very low fat or no fat diets don't provide enough energy for healthy growth and some research suggests that the rash of low fat, high carbohydrate regimes pursued by many weight watchers over the past few years may actually be responsible for an increase in insulin resistance. Exercise combined with a balanced diet is more likely to reap rewards in the long run.

Myth seven: Bananas are fattening.
Truth: They are actually low in fat. There is only half a gram of fat and 95 calories in a banana. Not only that but they are packed with potassium, come in their own packaging, are clean and very handy as a snack!

Myth eight: It's OK to skip breakfast.
Truth: Breakfast is a very important meal. When we're sleeping, we are also 'fasting' for an average of about eight hours, so it's essential to 'break' this fast. Although people who skip breakfast catch up on their energy requirements later in the day, they're unlikely to get all the vitamins and minerals that a simple breakfast can provide. Try porridge with honey for a wholesome but filling meal.

Myth nine: Cracking your knuckles gives you arthritis.
Truth: It's irritating and sounds excrutiating, but unfortunately you can no longer rely on the story that too much cracking causes arthritis to stop the person sitting next to you from doing it. No medical studies have been conducted that confirm a link between cracking your knuckles and the crippling pain induced by arthritis, but there are other scare stories you can rely on. According to one study the ligament stretching that occurs among regular knuckle-crackers can cause swollen hands and weaken the grip.

Myth 10: People are overweight because they have slow metabolisms.
Truth: It's a common complaint among the clinicially obese but studies show you can't use a slow metabolism as an explanation for weight gain. Of course, there may be other physical reasons for weighing in over the odds, but recent studies revealed fat people have faster metabolisms and burn off more energy than slimmer people simply to keep their bodies going.

Monday, July 23, 2007
i droveee =P 9:57 PM
ooyea i forgot to add. I DROVE MY BROS BMW LAST LAST NITE AT 1AM around kenny hill. hahaha i love my bro =P SO FRIGGING fun. its exactly lyk a racing game or smtg. omg i'll nvr forget it. so frigging fun. haha i wana do it again! cant wait for nxt year =)

wow.. 9:52 PM
today i saw a girl kiss another girl. and im not talking bout the usual gentle peck on the cheeks or whatever. i mean i SAW THEM KISSING LIKE HEAD ON! this includes tongues and etc. lol life just got a lil more interesting =P

Saturday, July 14, 2007
i met MTV VJs colby and denise!! 12:11 PM
hahaha i dunoe why but im like so estatic rite now. ok i had a bday sleepover at riverside for phoebs late celebration due to bloody exams. ok anyway long story short.. I MET COLBY AND DENISE! HAHAAAAA!!

colby looks really really really good in real life. his face is lyk so perfect. totally hunk material but he looked alil egoistic too. i dunoe. but tats just my first impression. he wasnt smiley or anything lyk when hes on mtv hosting and stuff. hmm anyways i got up to throw a piece of tissue paper when another familiar face was walking towards me. btw i was in riverside lobby waiting for my mum. ok anyways i barely even looked at the person but then i paused for a moment thinking she looked familiar. i looked at her again and kind of stared i suppose.

lol hope to God she din notice. anyways turned out to be denise!!! haha i couldnt even remember her name at first till i msged rach bout it and she said 'denise?' hahah anyways she looked so.. wow. i mean she doesnt look ordinary. she looks lyk someone who values fashion seriously and noes bout the fashion industry lyk how u should dress and wear ur makeup and accessories or watever. neways i was jst dumbfounded. wat are the chances of me running into MTV VJs? in kuching?!!! in RIVERSIDE?!?!?!?! hahahah

colby was standing by the door, sorta muttering a few words to the bellboy or whoever. anyways later he got into a cab along wif a female companion followed by denise. hehehehe it only hit till after they got into their car to quickly snap a photo! haha shit! i din even haf a camera! if only phoebs was wif me! she had a camera and the guts to ask them for a picture! CRAAAAP! hhaha owells i had a brush wif fame and i just let it slide. owells im ok wif it. haha neways the 2 looked kinda unfriendly. its prolly jst me but they seem really high-maintenanced. haha i dunoe. mayb im crazy but just a first impression. hmm.. colby is really cute! his facial features are lyk.. *drool* haha denise jst looks real hip and fashionable. hmm
btw i did snap a photo but its not super clear cos i din wan to make it so obvious tat i was taking their pic. the pic is them sitting in their cab! btw the cab number plate is HQ1723!! haha told my mum go buy 4D. hahahaahahahahahah jst kidding =P

add maths
hardest paper involving numbers i ever sat for. paper 1 was alrite la but paper 2 was like tat bomb tat dropped on Nagasaki and Hiroshima. waiseh my history so good =P tnks to the Pearl Harbour movie. anyways ARGH! add maths! add maths can jst suck my arse la. so annoyed. sighs jst hope somehow i got a pass or smtg -_-

bm
hmm not bad. i was expecting something much harder. bless mr.Tan Ai Shang's and mr.Willy Liew's heart for giving us ok questions. but i dont noe what is 'wahana' and 'bahana' and 'lancang' and i dunoe wat the unsur bunyi is for seloka pak kaduk. arghh but other than tat i tink i did ok. the essay paper was ok too. question 1 was a syarahan about 'langkah-langkah mencegah jenayah' and question 2 was a question about how traditional games are slowly extincting and how can we try and bring the hip back into congkak. hahah i did question 1!! cos i jst read an example of a syarahan essay so i knew the perfect canggih pendahuluan! =D yipeee!

EST
stupid est man.. i got the format wrong!!!! i wrote a report format when i should haf been writing an article format. omg im so irritated. tat section was like 30marks man!!! ah wtvr la. i was so drowsy also. having to study and panic like mad for bm -_- sighs and jst wen i was finished and was about to doze off into my imaginary wonderland whr rupert grint tinks noes i exist and chad michael murray dumped his gf to be wif me.... annoying emily jong goes 'OK CLASS TIME TO PUT DOWN UR PENS!' arrggggh... jst not my day 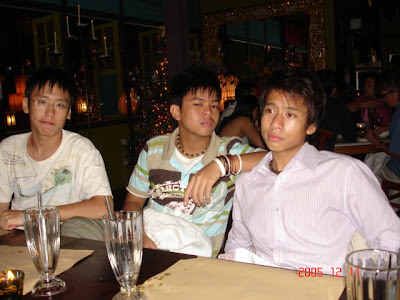 from ashs bday party at magenta in 05' 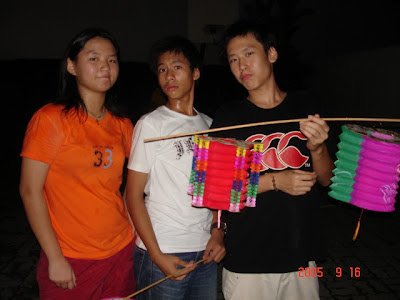 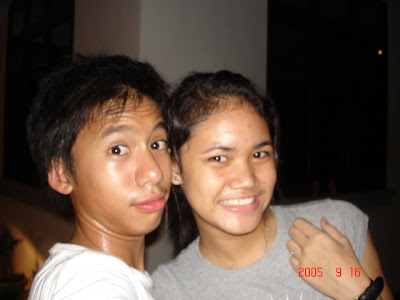 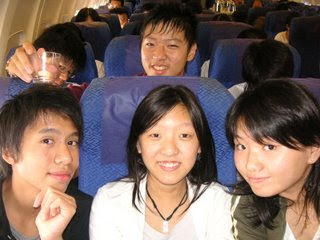 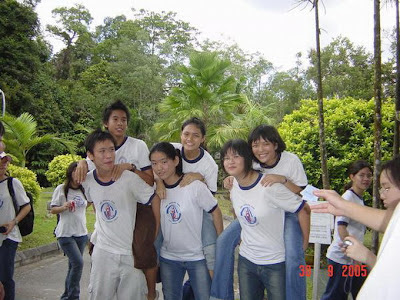 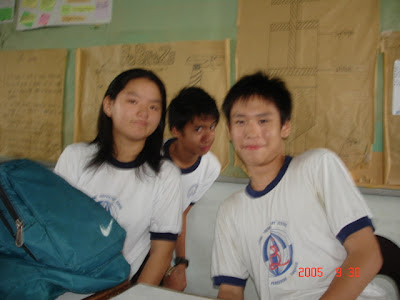 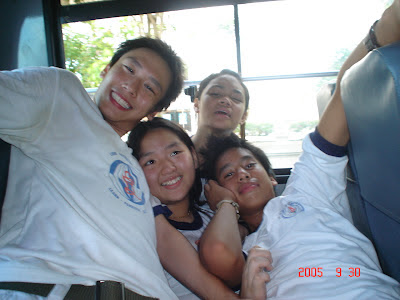