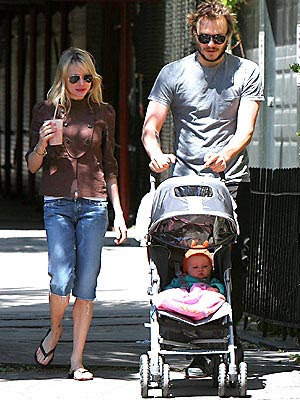 for ppl who have never seen any of his movies, this is heath ledger. 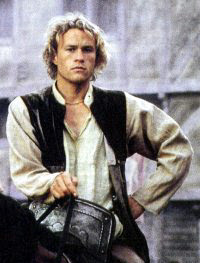 His ex-fiance, Michelle Williams from Dawson's Creek and their first baby girl. Omg imagine how sad his family must be. That poor little girl... 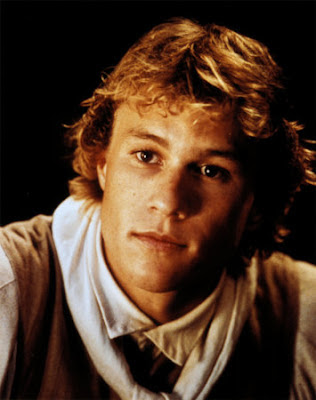 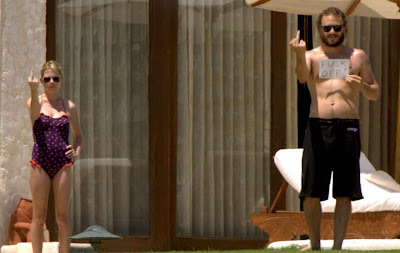 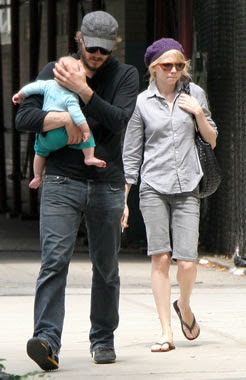 Sunday, January 20, 2008
KevJumba & Happyslip 2:56 PM
Check this out. Just find this while browsing the web. haha cool and hilarious plus the guy's kinda cute.

Put it in Purse - Kev Jumba


band-aid. probably the most hilarious video she made. hahaha LOVE IT! lol


boypren - I LOVE THE VIDEOS WHR HAPPYSLIP AND KEVJUMBA ARE TOGETHER!!! =) HE LOOKS SO CUTE WHEN HE WAS SINGING.. =)


i think happyslip is more entertaining but kevjumba is cute. haha and he's funny too plus cute! =)

haha hilarious stuff. my bro introduced to me. lol guess he has nothing better to do. lool

Hannah Montana Essay Winner Is A Fake!! 9:26 PM
GARLAND, Texas -- An essay that won a 6-year-old girl four tickets to a Hannah Montana concert began with the powerful line: "My daddy died this year in Iraq."

While gripping, it wasn't true - and now the girl may lose her tickets after her mom acknowledged to contest organizers it was all a lie. The sponsor of the contest was Club Libby Lu, a Chicago-based store that sells clothes, accessories and games intended for young girls.

The saga began Friday with company officials surprising the girl at a Club Libby Lu at a mall in suburban Garland, about 20 miles northeast of Dallas. The girl won a makeover that included a blonde Hannah Montana wig, as well as the grand prize: airfare for four to Albany, N.Y., and four tickets to the sold-out Hannah Montana concert on Jan. 9.

The mother had told company officials that the girl's father died April 17 in a roadside bombing in Iraq, company spokeswoman Robyn Caulfield said.

"We did the essay and that's what we did to win," Priscilla Ceballos, the mother, said in an interview with Dallas TV station KDFW. "We did whatever we could do to win."
She had identified the soldier as Sgt. Jonathon Menjivar, but the Department of Defense has no record of anyone with that name dying in Iraq. Caulfield said the mother has admitted to the deception.

"We regret that the original intent of the contest, which was to make a little girl's holiday extra special, has not been realized in the way we anticipated," said Mary Drolet, the CEO of Club Libby Lu. Drolet said the company is reviewing the matter, and is considering taking away the girl's tickets..

That must have been some desperate little girl. -_-" 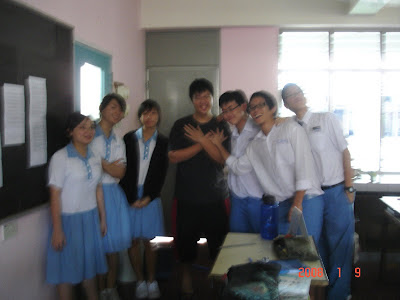 Listen little child.
There will come a day,
When you will be able,
Able to say.
Nevermind the pain,
Or the agrivation.
She knows there's a better way,
for you and me to be.

Look for the rainbow in every storm.
Fly like an angel,
Heaven sent to me. 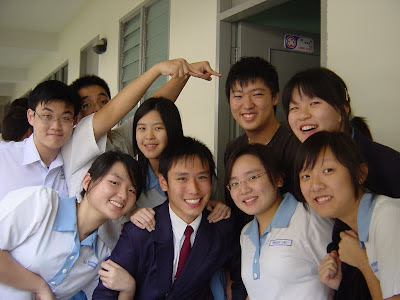 Goodbye my friend (I know you're gone, you said you're gone, but I can still feel you here)
It's not the end (You gotta keep it strong before the pain turns into fear)

Just a little girl,
Big imagination,
never letting no one take it away.
Went into the world, (into the world)
What a revelation.
She found there's a better way for you and me to be.

Look for the rainbow in every storm,
Find out for certain,
Love's gonna be there for you,
You'll always be someone's baby. 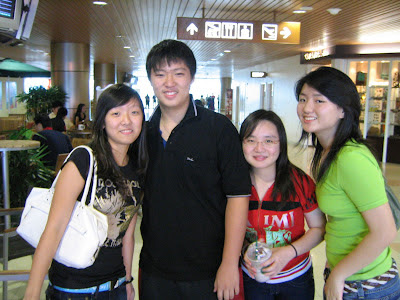 Chorus:
Goodbye my friend (I know you're gone, you said you're gone, but I can still feel you here)
It's not the end (You gotta keep it strong before the pain turns into fear)

Bridge:
The times when we would play about,
The way we use to scream and shout.
We never drempt you'd go your own sweet way.

Look for the rainbow in every storm,
Find out for certain,
Love's gonna be there for you,
You'll always be someone's baby.

Chorus:
Goodbye my friend (I know you're gone, you said you're gone, but I can still feel you here)
It's not the end (You gotta keep it strong before the pain turns into fear) 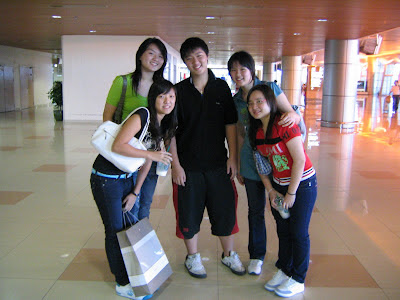 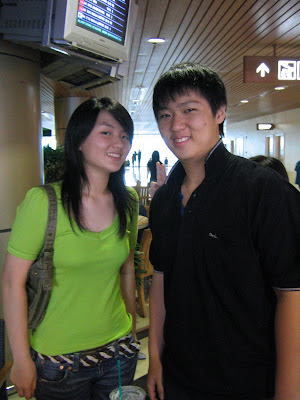 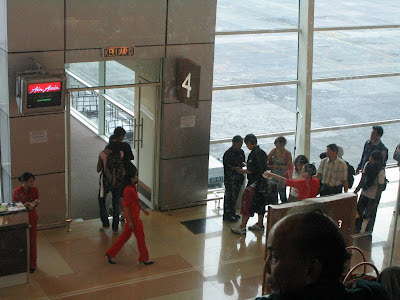 
Wednesday, January 09, 2008
pics from my phone! 5:53 PM
haha i forgot that peg recently sent me all the pics i wanted to put in my comp since forever. haha here they are :

Ling Ling took this pic of me while we were waiting for the rest of the team to show. This was taken at some bball competition at Batu Kawa. Please ignore my grouchy face, I wasn't even feeling grouchy just bored.

Ham!!!! =) went out with her recently. She was in Manila, then flew back to Kch for Xmas then flew away again to Macau -_- such a glamorous life.

While she was on the phone, I took the initiative to snap a pic of her chest for Joel. Evidence that Ham no longer has mosquitoe bites on her chest. =D

My first attempt to try make a heavenly-sort-of pic. hahahah did i fail or pass?

During the days before exam, I went to State Library with Krystle in an attempt to revise add maths. hehe we got bored so we did this! =)

The result of my annoying flu. For as long as I can remember, I have always had flu. Don't be surprised to see me walking on the street with a tissue in my hand or a packet of Kleenex. The number of trees I've killed... sighs

The clearest pic I took of the stupid Kelisa that rammed into my fence outside my house. -_-" Luckily it wasn't that serious. Idiots.

Haha my mum attempting to learn how to SMS. hahahahahahahaha funny times. I have a video of it too.

I didn't take this nor do I know who did. All I know is this was during Alyssa's bday party at Hilton.

Haha Joey, the happy boy during add maths tuition. Crap, won't be seeing him next year though =( Good la, he kept on finding ways to disturb me so I ended up not really finishing any of the work the teacher gave. -_-" One time, we were chatting about how sad it would be to die a virgin -_-". (His idea obviously!)


Sandra: Oh no, then you might up like an old woman living with a dozen cats or something.

Joey: Worse come to worse, just grab one of the cats la...


Then we both burst out laughing. -_-" sighs no wonder why my add maths has not been improving.

I think Clement took this. Interact night. People have commented that I look like I'm lookin' .. -_-". I'M NOT!

My hot cousin, AJ, on the way to school. Haha he's asleep incase you can't see it in the pic. But he's actually smiling at the same time too. Hmm strange. Probably thinking of me, his sweet kind cousin. =D

Studying for exams makes me do weird things. O.O


DUE TO A VIEWER'S PERSISTENT COMMENTS, THE PICTURE THAT WAS ORIGINALLY POSTED HERE HAS BEEN REMOVED. BUT OF COURSE, IF ANYONE WISHES DEEPLY TO SEE THE PICTURE FOR THEIR OWN COMFORT, FEEL FREE TO EMAIL ME AND BID A SUITABLE AMOUNT. AS AN EXTRA BONUS, THE HIGHEST BIDDER WILL ALSO RECEIVE A VIDEO OF THE PERSON IN THE PICTURE PERFORMING 'SEXYBACK' BY JUSTIN TIMBERLAKE. THANK YOU.

Mummykins! One of the SUPER few pics where she's smiling lol =)

Saturday, January 05, 2008
Mr.Kenny 6:07 PM
"Hey, my name is Kenny Leong. Okay, so how about everyone stand up and introduce themselves?"

But I would have to say the funniest one we heard was a guy who said "I like long walks on the beach."

hahahahahahahaahhaahhahaahahhah guess who? I heard next door, someone said 'I like unicorns' or something like that. Haha great way to start off our first physics lesson with Mr. Kenny. =)

-_-" hahaha just thought of that. Wheeeeee!